The liver is our most valuable organ completely capable of rebuilding itself.   It is a vital organ and existence of a human without liver is next to impossible.

All of the blood leaving the stomach and intestines passes through the liver.   The liver regulates most chemical levels in the blood and excretes a product called bile, which helps carry away waste product from the liver.  The gallbladder, where bile is stored, is found in a small hollow on the underside of the liver.  The liver processes this blood and breaks down, balances, and creates the nutrients. It also breaks down drugs into forms that are easier to use for the rest of the body. More than 500 vital functions have been identified with the liver.  The liver is the only visceral organ that possesses remarkable capacity to regenerate.

Liver tissue is made up of lots of smaller units of liver cells called lobules. Many canals carrying blood and bile run between the liver cells. Blood coming from the digestive organs flows through the portal vein to the liver, carrying nutrients, medication and also toxic substances. Once they reach the liver, these substances are processed, stored, altered, detoxified, and passed back into the blood or released in the bowel to be eliminated. In this way the liver can, for example, remove alcohol from your blood and get rid of by-products from the breakdown of medications.

With the help of vitamin K, the liver produces proteins that are important in blood clotting. It is also one of the organs that break down old or damaged blood cells.   More on Functions… 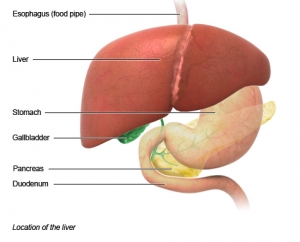 The liver is located in the upper right-hand portion of the abdominal cavity, beneath the diaphragm and on top of the stomach, right kidney, and intestines.  It is a dark, reddish-brown triangle-shaped organ that weighs about 3 pounds and is found in the right upper abdomen, below the diaphragm.  More on Location…

It takes up most of the space under the ribs and some space in the left upper abdomen, too. Viewed from the outside, a larger right lobe and smaller left lobe can be distinguished. The two lobes are separated by a band of connective tissue that anchors the liver to the abdominal cavity.