Living donor liver transplantation (LDLT) has emerged in recent decades as a critical surgical option for patients with end stage liver disease, such as cirrhosis and/or hepatocellular carcinoma often attributable to one or more of the following: long-term alcohol abuse, long-term untreated hepatitis C infection, long-term untreated hepatitis B infection. The concept of LDLT is based on (1) the remarkable regenerative capacities of the human liver and (2) the widespread shortage of cadaveric livers for patients awaiting transplant. In LDLT, a piece of healthy liver is surgically removed from a living person and transplanted into a recipient, immediately after the recipient’s diseased liver has been entirely removed.

Historically, LDLT began with terminal pediatric patients, whose parents were motivated to risk donating a portion of their compatible healthy livers to replace their children’s failing ones. The first report of successful LDLT was by Dr. Christoph Broelsch at the University of Chicago Medical Center in November 1989, when two-year-old Alyssa Smith received a portion of her mother’s liver.  Surgeons eventually realized that adult-to-adult LDLT was also possible, and now the practice is common in a few reputable medical institutes. It is considered more technically demanding than even standard, cadaveric donor liver transplantation, and also poses the ethical problems underlying the indication of a major surgical operation (hemihepatectomy or related procedure) on a healthy human being. In various case series, the risk of complications in the donor is around 10%, and very occasionally a second operation is needed. Common problems are biliary fistula, gastric stasis and infections; they are more common after removal of the right lobe of the liver. Death after LDLT has been reported at 0% (Japan), 0.3% (USA) and <1% (Europe), with risks likely to decrease further as surgeons gain more experience in this procedure. Since the law was changed to permit altruistic non-directed living organ donations in the UK in 2006, the first altruistic living liver donation took place in Britain in December 2012.

In a typical adult recipient LDLT, 55 to 70% of the liver (the right lobe) is removed from a healthy living donor. The donor’s liver will regenerate approaching 100% function within 4–6 weeks, and will almost reach full volumetric size with recapitulation of the normal structure soon thereafter. It may be possible to remove up to 70% of the liver from a healthy living donor without harm in most cases. The transplanted portion will reach full function and the appropriate size in the recipient as well, although it will take longer than for the donor.

Living donors are faced with risks and/or complications after the surgery. Blood clots and biliary problems have the possibility of arising in the donor post-op, but these issues are remedied fairly easily. Although death is a risk that a living donor must be willing to accept prior to the surgery, the mortality rate of living donors in the United States is low. The LDLT donor’s immune system does diminish as a result of the liver regenerating, so certain foods which would normally cause an upset stomach could cause serious illness. 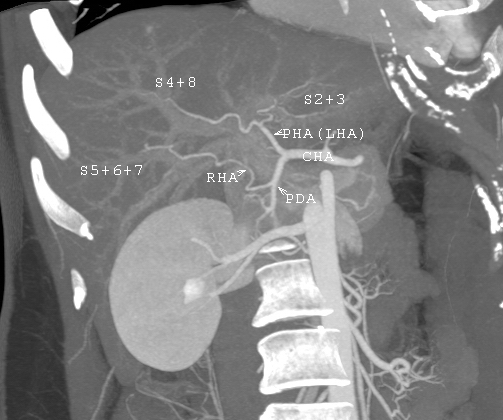 CT scan performed for evaluation of a potential donor. The image shows an unusual variation of hepatic artery. The left hepatic artery supplies not only left lobe but also segment 8. The anatomy makes right lobe donation impossible. Even used as left lobe or lateral segment donation, it would be very technically challenging in anastomosing the small arteries.

Any member of the family, parent, sibling, child, spouse or a volunteer can donate their liver. The criteria for a liver donation include:

Living donor surgery is done at a major center. Very few individuals require any blood transfusions during or after surgery. All potential donors should know there is a 0.5 to 1.0 percent chance of death. Other risks of donating a liver include bleeding, infection, painful incision, possibility of blood clots and a prolonged recovery.[11] The vast majority of donors enjoy complete and full recovery within 2–3 months. 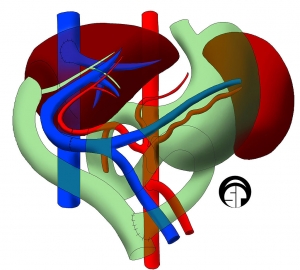 In children, due to their smaller abdominal cavity, there is only space for a partial segment of liver, usually the left lobe of the donor’s liver. This is also known as a “split” liver transplant. There are four anastomoses required for a “split” liver transplant: hepaticojejunostomy (biliary drainage connecting to a roux limb of jejunum), portal venous anatomosis, hepatic arterial anastomosis, and inferior vena cava anastomosis.

In children, living liver donor transplantations have become very accepted. The accessibility of adult parents who want to donate a piece of the liver for their children/infants has reduced the number of children who would have otherwise died waiting for a transplant. Having a parent as a donor also has made it a lot easier for children – because both patients are in the same hospital and can help boost each other’s morale.[12]

Living donor transplantation is a multidisciplinary approach. All living liver donors undergo medical evaluation. Every hospital which performs transplants has dedicated nurses that provide specific information about the procedure and answer questions that families may have. During the evaluation process, confidentiality is assured on the potential donor. Every effort is made to ensure that organ donation is not made by coercion from other family members. The transplant team provides both the donor and family thorough counseling and support which continues until full recovery is made.

All donors are assessed medically to ensure that they can undergo the surgery. Blood type of the donor and recipient must be compatible but not always identical. Other things assessed prior to surgery include the anatomy of the donor liver. However, even with mild variations in blood vessels and bile duct, surgeons today are able to perform transplantation without problems. The most important criterion for a living liver donor is to be in excellent health.